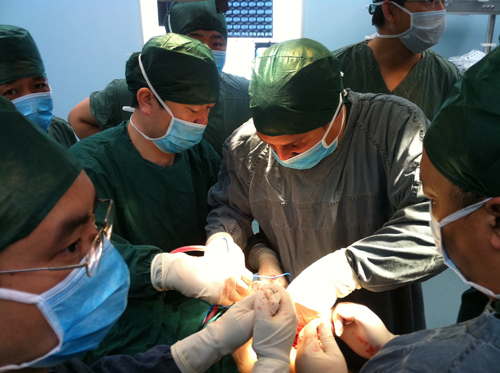 My trip began in Wendeng, a city in North-Western China. I was the guest of an orthopaedics symposium where I presented our experience with the Corail fully HA coated stem for 25 years. We had lunch with surgeons of this region and we shared our point of view concerning Hip Arthroplasty.
The uncemented stem is now well implanted in China. In big cities they use more and more ceramicto-ceramic bearings.

Then we drove to Yantai, a city near the Yellow Sea. I performed a live surgery to show them how to implant the Corail stem. A lot of surgeons implant this stem, but they have learned by themselves.
During this surgery, I could explain to them the philosophy and the real surgical technique. They feel anxious about the primary stability without canal fit and fill, so sometimes they use too big stems with the risk of femoral fractures. They don’t use templating so they don’t know exactly the stem choice they will have to make. But fortunately, they progress very fast and have good functional results with this stem. 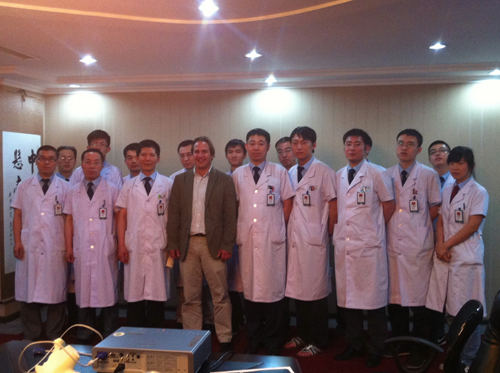 The next step was Xintai. I visited the hospital and I’ve been surprised by the difference between the modernity of the op rooms and the rest of the hospital. I consulted some patients with hip osteonecrosis who were discussed about hip replacement. I saw a young patient with bipolar loosening because of PE wear 6 years after implantation. Maybe it would have been better to use
ceramic-to-ceramic bearing for this patient, but it would have been too expensive for him. The economic considerations are very important in China, because the patient has to pay himself for the surgery. Then I made a symposium with local orthopaedic surgeons and we discussed about primary surgery, bearing choices, and also revision surgery. A group of surgeons were interested in templating, so I showed them the different steps.

We took the High Speed train to go to Xian, one of the biggest Chinese cities. I met surgeons of 2 big hospitals. In one, 4 floors were dedicated to orthopaedic surgery. One of them was exclusively for arthroplasties. After an instructional course, we discussed about their fears concerning Corail. “How can I be sure of the primary stability?” was a recurrent question. I answered that the primary stability testing is not different from the testing they used with fit and fill stems. In fact, we increase progressively with the non-aggressive broaches to obtain a good axial but also torsional stability.
When we obtain both of these stabilities, the primary stability is achieved. When you’re a beginner, you should template before surgery to know exactly the size and kind of stem you’ll use. You should also introduce a collared stem. The collar is like a safety belt. The second question was: “How can we use a Corail standard in case of coxa vara ?”. With Corail, we can realize a very low femoral neck cut just near the lesser trochanter, because primary stability won’t be achieved exclusively in this part. If you make a low cut and use a short neck, you’ll be able to use this stem in coxa vara without limb lengthening. 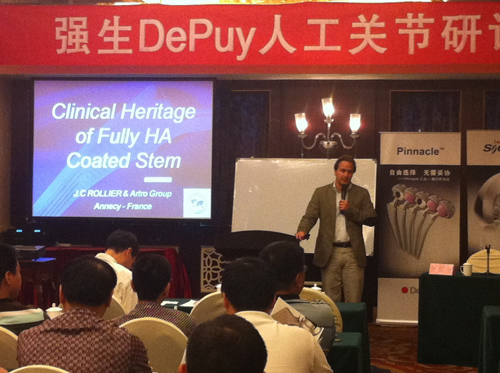 The last day we went back to Beijing by plane. We visited the third university Hospital. In this place, orthopaedic surgery takes 6 floors. Traumatology, arthroplasty, and sport medicine are separated. So, surgeons are more specialized comparing to smaller cities. We discussed about full coating versus proximal coating. I showed them the results of Corail osteointegration published in the 25 years book (Sauramps edition). We have observed that after 25 years, fixation had been achieved in half part only in proximal femur and in half part in proximal and distal femur. We can think that in lot of cases, proximal fixation is insufficient. That’s why we prefer to use a full coating to be sure of stem fixation in every patient.

The second argument concerns the Polyethylene wear. It leads to proximal granuloma and osteolysis.
So when we use a proximal fixation stem we have a risk of loosening because of this phenomenon. In our series of 387 patients after 25 years, we have demonstrated that survivorship was not affected by proximal osteolysis because of distal fixation. So, when we had to revise patients for cup loosening, we just had to remove granulomatory tissues of proximal part and use an allograft to reconstruct proximal part without changing the stem, which was stable. To finish I showed them the surgical procedure to remove a well fixed Corail in case of revision for biomechanical disorders, dislocation or limb length discrepancy for example.

Then, I took a plane to France. This trip was interesting because we shared a lot of topics around hip arthroplasty. Lots of surgeons are convinced by the Corail concept and want to learn more. I offered them to come to France (Annecy and Lyon) during fellowships or only for a couple of days in our visiting centres. 4 Corail learning centres are also organised in Annecy each year.