Following these visits in Asia and in China, it became necessary to design a Corail for Asian morphotypes. It was put on the Asian market in 2015.

The Corail in Japan !

Introduction of the Corail System into the Japan has been a long journey! I met for the first time several Japanese surgeons in Kyoto in 2007 (Photo 1). If the concept of a cementless fixation using HA-coating (hydroxyl apatite) technology, has been quickly accepted by our colleagues, it rapidly became clear, after analyzing numerous radiological files, that the range of sizes and especially the design of extramedullary segment of the implant, did not precisely reconstruct the anatomy of the hip to be operated on, in a significant number of cases. In addition to a high proportion of “small’ femur, the Japanese population is characterized by a relatively short neck length, often in coxa-vara. This morphology is commonly called “the Asian hip”. It was therefore decided to create a Franco-Japanese team including R & D engineers and orthopaedic surgeons, in order to accurately analyze the anatomical and radiological parameters of a standard Japanese population, and to develop a statistical model allowing the creation of a new range of implants (called “short neck” platform) perfectly suited to this particular morphology. This range is characterized by a shorter prosthetic neck decreasing both the offset and the height of the center of head (the cervico-diaphyseal angle being either 125 ° or 135 °).

Many hours of work, many meetings, many conference-calls were needed, before the validation, during a meeting in Osaka in 2009 (Photo 2), of the principle of this project. Then it was a very long period of prototypes evaluation and discussion with the local regulatory authorities, before the first Corail implantation in Japan in 2013, and the release of the whole platform worldwide, in 2015.

Immediately, the enthusiasm for Corail system was great in Japan. In April 2015 we organized in Tokyo the first Corail Learning Center (Photo 3): it brought together more than 100 participants from the whole Asia-Pacific region: Japan, Indonesia, Malaysia, Singapore, Thailand, China … Following this Symposium, we have received several requests for fellowship in our clinics either in Lyon or in Annecy… But above all, we organized, with the DePuy local team, a second Learning Center in the new Scientific Center built by DePuy in the suburb of Tokyo (Photo 4). This new meeting took place on March 12th and 13th, with 116 participants mainly coming from Japan, but also including a large Indian delegation (Photo 5&6). We have also created a real Japanese Faculty (Photo 7) with Mr. M.Kaya from Sapporo, M. Osaki, M. Matsubara, K. Oinuma and M. Kim! Exchanges were very interactive and the different sessions not long enough to answer all the questions from a passionate audience!

Before leaving Tokyo, Mr. Yoshihiko Yanagimoto, President of DePuy Synthes Japan, made us promise to consider several meetings of this type each year in Japan, and also to consider a Japanese translation of our reference book: “The Corail Hip System”, published by Springer in 2011, with a reissue in 2016. Great thanks to the Empire of the rising sun! 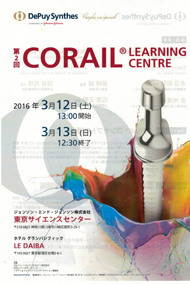